Liquid-based cooling systems for car batteries may soon be a thing of the past. What’s going to replace them? Self-contained, cost-effective, 3D printed heat sinks with no moving components and no power requirements. That’s what researchers at Embry-Riddle Aeronautical University are looking to create. And with the Composer Filament Maker in their lab, they’re closer than ever to making their vision a reality. 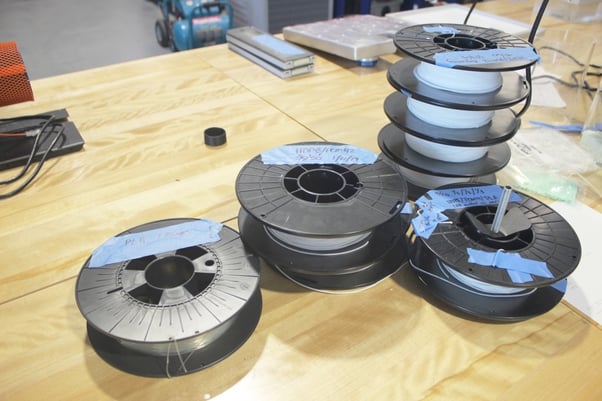 "3devo’s filament maker allows us to easily shift between materials, without the limitation of complex polymers holding us back. We have mixed various materials together such as phase-change materials mixed with HDPE and PLA.” – Sandra Boetcher, Associate Professor of Mechanical Engineering at Embry-Riddle Aeronautical University

Casting PCM in a New Mold

With the ability to absorb heat while maintaining their temperature, phase-change materials (PCM) unlock exciting possibilities in cooling system design. But there’s one catch – it’s difficult to contain PCM, especially when temperatures rise beyond a certain point.

In the past, Boetcher and her researchers have tried to tackle this challenge by sealing the PCM inside an aluminum casing, thus designing a basic self-contained cold plate that can directly be placed on car batteries. Later, however, they came up with a better idea.

“How do you contain PCM? That’s such a problem. And I started to see solutions through shape stabilized PCM,” Boetcher shared. “That’s when we realized we could mix the phase-change material with plastic.”

The concept was simple enough – mix PCM and plastic to create filament that could later be used to 3D print heat sinks. This way, the PCM itself gets shape-stabilized and becomes less flammable at the same time.

Implementing this concept didn’t turn out to be that simple, though. The researchers originally used different filament extruder, from a leading desktop extrusion company. But all they could manage was 20% of PCM in their filament. Plus, they couldn’t control the quality or diameter of their filament or customize it nearly as much as they would’ve liked.

The Solution: A Machine That Could Do It All

What Boetcher’s team needed from their ideal filament extruder was the ability to produce high-quality filament with perfect diameter control, even when working with a mix of non-typical materials. Plus, because they were in the initial phases of their research, they also needed the freedom to experiment and customize. And just as important was the cost factor. Their new filament maker had to remain affordable even while offering all the capabilities they needed.

The 3devo Composer Filament Maker checked all these boxes and then some. It became a part of the Embry-Riddle campus in June 2018, and has made nothing but great impressions ever since! 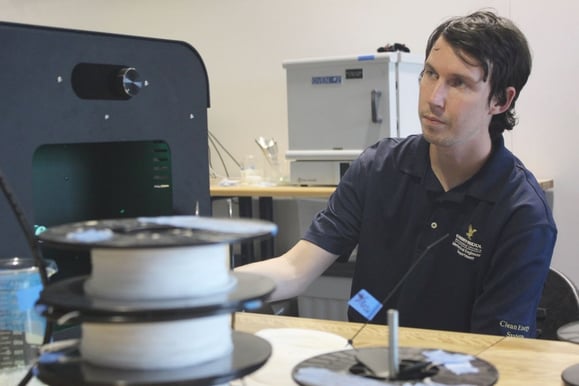 With the help of the Composer Filament Maker, Boetcher’s team has been able to mix PCM with high-density polyethylene (HDPE) in ratios that weren’t possible before. Their new filament has 60% PCM – 3X higher than what they could manage with their previous extruder.

The quality of their new filament has also improved by leaps and bounds. Plus, the intuitive features and interface of the Composer Filament Maker have made it remarkably easy for the researchers to try out new material mixes and PCM-plastic ratios. They’re currently working on increasing PCM levels in their filament even further, and are also considering plastics other than HDPE to increase the strength of their filament. They’re also toying with the idea of using this filament to create matrix-like heat exchangers instead of solid 3D printed blocks.

The fun has just begun, and we’re sure we’ll be hearing about some exciting new innovations from Embry-Riddle soon. For now, it’s a privilege just to be a part of their journey, and to contribute to the future of heat regulation in such a fundamental way.